I had seen this cigar in a Cigars International catalog when it first hit the streets.  Not knowing anything about it, and strictly speaking the band did not look appealing (I know - the whole book-by-its-cover deal) so I passed it by.  I assumed (again, I know) that the Warlock was a cheap knock-off and it would vanish like its namesake in a puff of acrid smoke.  I never expected to see it on Cigar Aficionado's list of top 25 cigars of 2011.  But, during the Winter of 2012, I saw it listed as number 9 on the list, which piqued my interest.....but I had not been able to find them anywhere in my area.

So, I ordered one last week from SeriousCigars.com....because Cigars International doesn't sell them in singles....and since today is " Wharf Wednesday" , I took it to work with me for our weekly lunch smoke.  I sat at my desk working on a password policy script for one of our websites (not an easy task) all the while I could smell the cedar aroma coming from the plastic bag.  My mouth was watering by lunch time.  So how was the Warlock?  Let's find out....

Construction: The Warlock Robusto is short and fat with a glistening oily wrapper.  I noticed an oddly lumpy exterior - like the cigar was packed to the gills like a handmade sausage.  It is also heavy in the hand....always a good sign.  My expectations were high from the beginning.

Pre-light Aroma and Draw: I clipped the Warlock and was stunned to find a flawless draw.  No too open.  Not too closed.  In a word, just right.  Out of the cellophane it gave off strong sweet tobacco aroma, lots of cedar, and a nice spice.

Light and Burn: I had very little to complain about - except not enough time to smoke it since it was lunch and all that.  It lit easily of course, and the burn was nearly perfect.  I touched it up a couple of times with a match during the smoke but overall it really performed well.

Tasting: The Warlock is loaded with flavor. I picked up cocoa, black coffee, cream, caramel, dark chocolate, and plenty of earth.  Honestly, I was shocked at how good this little thing was.

Final Thoughts: For an Altadis offering, the Warlock is superb....Heck, for any cigar company it is superb!  In some of my other reviews, I have discounted Altadis brands for being overly mass-produced.  Well, the Warlock changes my mind about that to a certain degree.  It's a small brand under a big umbrella so if they keep this kind of thing up, I can see good things on the horizon.  I have just added a new cigar to list of favorites.  Highly recommended. 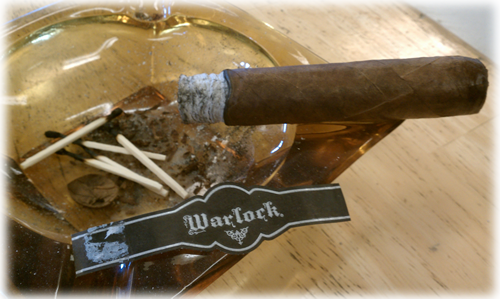 In my haste to fire this thing up, I forgot to take an unlit photo