Back in the early 2000s, I went through a phase where I smoked Sosa cigars and almost nothing else.  I found them to be perfectly constructed and rich in flavor.  Over the years, as often happens, tastes change and products vanish.  Sadly, Sosa cigars because very scarce in the Dayton area, so I switched to....I believe it was Camacho.  Anyway, this past winter I received an e-mail from no less than Arby Sosa asking me to review their new venture with Fusion Cigars.  Well, I was pretty darned excited about that, as you can imagine.  This review has been in the hopper for far too long - and to be honest that is a good thing.  More on that later.  For now, let's get smoking....

Construction: Overall the Headlines line are very rustic looking cigars.  They are mottled dark and medium red-brown with a few veins here and there.  Seams are tight and the cap is well executed too.

Pre-light Aroma and Draw: Out of the cellophane the Headlines gives off a nice sweet and very rich wheat bread note that is something I haven't noted in an unlit cigar before. From the foot there is a rye note that comes from a nice grassy note.  Very nice, and I haven't even lit it yet.  The draw is nice and open with just the right amount of resistance.

Light and Burn: The burn on this beauty is nicely uneventful.

Tasting: Off the light, I get a seriously delicious sweet cinnamon roll note - no fooling.  It then takes a mineral and pepper turn with some earth in there for good measure.  Now, I noted in the intro that it was a good thing that I waited a while to do this review.  I smoked three of the six they sent me at various times over the past few months and the cigar was a tad raw at first....now, they are a different animal.  Sitting in the 65 degree warm sun here in Ohio last week, I smoked one of them and, after mumbling to myself the word delicious a few times, I realized it was time for them to be reviewed.  So, back to the review....  A copious amount of smoke pours from this cigar.  Notes of cocoa, dark roast coffee, and touch of pepper mingle around a nice chewy earthy core.  Strength is in the medium range but I can tell that if I really put the spurs to this cigar it would lean into the full range.

The middle third starts off with a bump in the pepper arena.  While the core is still quite earthy, the pepper note adds to it well here.  A faint dried fruit and nut note pops up and adds to what is a really nice complexity so far.  Some toasty wood and floral notes kick in too.  Like I said, delicious.

The final third is here now and strength does pick up a tad.  The burn isn't blazing hot either - often an issue with a cigar with an open draw.  Notes are maintaining from the first two thirds but I do get the added flavor of malty bread.  Just a terrific cigar from start to finish.

Final Thoughts: I am very glad I waited on these cigars.  When I smoked them in January and February they were raw with a lot of mineral notes...something I have found that means a cigar needs some rest.  These will, I think, get better with age...which is saying something.  I would smoke these regularly and they come highly recommended. 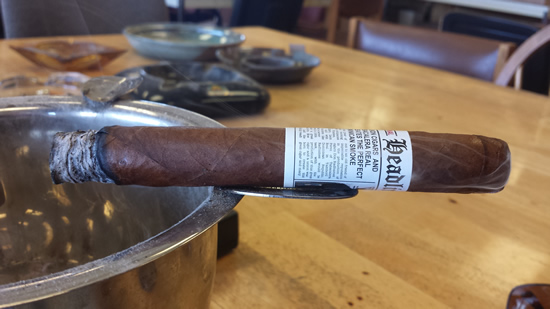 The band looks like an old newspaper.  If you can get it off in one piece you can actually read it. Pretty cool.