As I take up my usual chair and table location at The Wharf during any normal visit, I usually walk right past the Oliva, Camacho, Perdomo, and Kristoff displays on my way to the Tatuaje section.  Saturday last, as I was walking to the restroom, which also happens to be in that direction, I noticed something new in one of the counter cases.  After some inquiry Josh told me that they were new and that he had heard good things about them.  I made a mental note and filed it away for Wednesday.  Well, as luck would have it, James and I ended up at The Wharf on Monday evening.  A rather out-of-cycle Wharf sit-down if ever there was one.  So, I selected said note I had filed away and dialed up a Perdomo 20th Anniversary robusto.  How was it?  Let's see.

Construction: The 20th Anniversary is a very nicely constructed cigar.  I did see a slight blemish in the cigar's cap where a small section was folded over on itself but that is really nit-picking.  Otherwise the thing is gorgeous.  It was nice enough looking for me to notice them in a case I had walked past hundreds of times so that is saying something.  The wrapper is a nice red-brown leathery deal with a nice amount of oils.  Easy to see why it caught my eye.

Pre-light Aroma and Draw: As I expected - having had similar experiences with Perdomo cigars in the past - the aroma of this beauty was cocoa sweet and cedar spice.  Very nice!  Clipped, the draw was spot on perfect - something I was also expecting.

Light and Burn:  Three matches and the 20th blazed to life - causing a coughing fit in its wake.  The original few puffs let off copious amounts of smoke which blew straight back into my face.  I couldn't help laughing at myself...which made me cough more.  The burn was about 99% spot-on all the way down.  My OCD for even burns only made me touch up a couple of times.

Tasting: The 20th Anniversary is a nicely complex cigar without being overstated.  Those first few puffs tasted like brownies baking in the oven.  I also noted more cocoa, cedar, earth, leather, coffee, and cream as I puffed my way through this excellent smoke.  While not as complex as Pete Johnson or Don Pepin creations, this cigar holds its own - easily one of Nick Perdomo's best creations in years.  My good buddy, James was smoking a Tatuaje Unicos and I liken the flavors and characteristics of this cigar to a milder version of that masterpiece.  High praise indeed!

Final Thoughts: I don't know why I have been trying these big ring gauge cigars lately.  Honestly, I usually limit myself to 52....so here I am with another 56?  I had another small bout of wrapper explosion with this cigar but I was about a quarter inch from the end of the smoke so no-harm-no foul.  Last winter, I was smoking my pipe and Perdomo Habano Maduro cigars almost exclusively.  After the Tatuaje land rush this summer, I found the Perdomo a little lacking and ceased smoking them - however good they are.  So this new Anniversary cigar is a welcome treat for me.  I have always liked Perdomo cigars and this one is a the top of the heap for me.  I highly recommend this cigar! 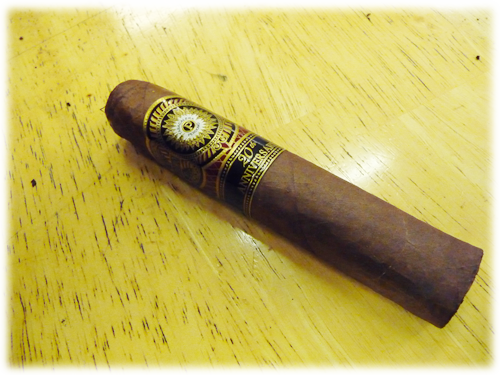 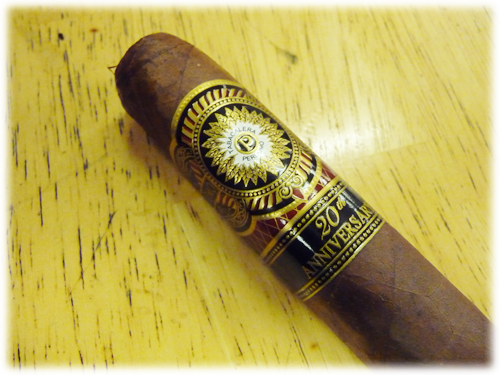