For today's review, I find myself amidst the renovations underway at The Wharf.  Out of my comfort zone, I sit on the opposite side of the store at a table I have only sat at twice in the past decade and in a completely unfamiliar chair that lacks my groove.  I make lots of jokes about fearing change and that the upgrades are similar to a new pair of underwear (reference to Wayne's World, of course)....Yet my vexation may be soothed markedly by a small cigar by the name of Tantrum.  Yet another delicious sample provided by Emilio Cigars Chief, Gary Griffith.  So, will this rather small cigar assuage my fear of the changes happening around me?  Let's see....

Construction: The Tantrum is a diminutive cigar.  Easily a petit corona size.  The wrapper is a nice red-brown color with very few veins and a mild box press.  The sample I have contains a couple of wrapper tears that might be a little troublesome.  We will see.  After review note:  The wrapper damage had absolutely no effect on the cigar at all.

Pre-light Aroma and Draw: Out of the cellophane, I get the aroma of strong sweet tobacco with a slight hint of hay and barnyard.  The cut is simple and the draw is spot on perfect.

Light and Burn: The burn on the sample I am trying is a little wonky but nothing a slight touch up can't fix.  I noted some inconsistency with the burn - yet nothing so terrible that it made the cigar less fun to smoke.

Tasting: The tantrum starts off with a bit of a spicy punch with tons of red pepper and cocoa.  Because this cigar is fairly small, I am going to break this one into two halves instead of thirds.

The first half is warm and spicy.  There are some heavy layers of red pepper coating my tongue.  I like spicy food so this start is right up my alley.  There are some very subtle sweet notes underneath the pepper as well.  Cocoa and vanilla, but only very slight as the pepper spice is so pronounced.  It smooths out a bit and the spice lets some wood and nut flavors show through.

The second half is a bit less spicy but that red pepper still punches pretty hard.  I am getting more flavors too.  Coffee, roast nuts, a touch of oak, and some cocoa sweetness too.  It's a quick smoke - like the tantrum is is named for.  As the cigar wraps up, I get more espresso and some salty notes on top of the red pepper.  It reminds me of Mexican hot chocolate with chili pepper.  Terrific cigar.

Value: The retail price is around $10 for one of these small wonders.  Considering the quality and age of the tobaccos they are using that is a pretty fair price.  Easily one of the more expensive non-Cuban petit coronas I have smoked - but well worth it.  This being a sample, I can't complain.

Final Thoughts: I am glad I ate before I smoked this little powerhouse.  It may not be the Animal Cracker in terms of might, but that spicy core and sheer volume of smoke make the Tantrum something for rookies to be wary of.  I would smoke these after a big dinner anytime.  Ezra Zion continues to release some absolutely terrific and extremely unique cigars.  I am excited to see what they have in store for us next.  As for the Tantrum, I highly recommend this small but mighty cigar. 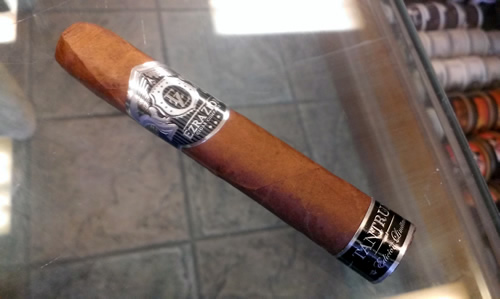 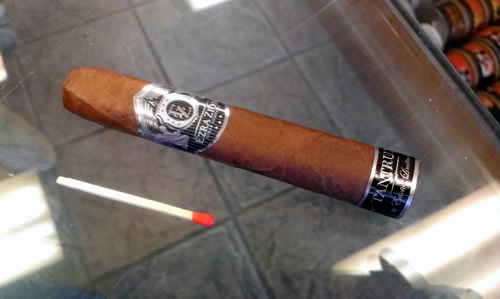 ...but toss in a match for scale and you can see just tow tiny this beauty is. 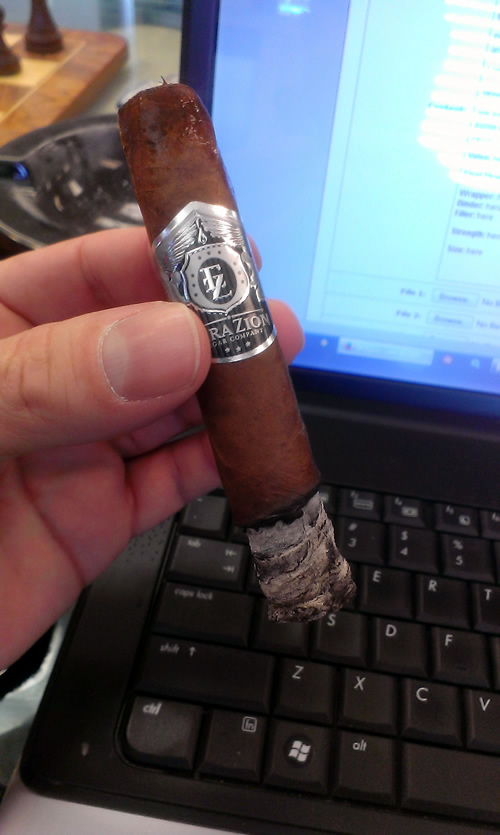 Either my hand is huge or the cigar is small....hmmmm