I remember the first time I tried a La Gloria.  It was the core line in 2002 or so.  I was overpowered by the strength of the cigar so much that I didn't like what it offered.  Since then they have become my favorite big name brand on the market - followed closely by Punch.  Early this summer I noticed a new offering in a Cigars International catalog called the La Gloria Serie R Black.  Needless to say, I was very interested.  Turns out the black edition is for online retailers only.  Not wanting to leave the brick and mortar crew out, La Gloria has created the Serie R Esteli line - for all purposes the same binder and filler with a different wrapper.  When Jordan handed me a sample of this newline, I was excited as hell.  Let's get to it....

Construction: As with every La Gloria I have ever had, the construction, from a visual standpoint, is beautiful.  The wrapper is a nice milk chocolate color with some dark mottling and very few veins.  The oils in the wrapper are intense - you can see light reflecting off the surface even!

Pre-light Aroma and Draw: Out of the cello, I get leather and oak from the wrapper and a barnyard manure from the foot - which sounds terrible but usually means good things in the cigar world.  The draw is a tinly bit snug but nothing too upsetting.

Light and Burn: I used a couple of matches to fire this beauty up and one more to touch up the rather thick wrapper leaf. I had a very mild hot spot in the first third that didn't amount to much.  The ash is pale gray and mildly flaky.

Tasting: Starting off the Esteli is delicious.  I get a nice sweet core of tobacco, oak, and a rich earthiness that is just terrific.

As the first third starts there are notes of black pepper, oak, and heavy tobacco all wrapped in a dense earthy core.  The body is easily leaning towards full at this stage.  La Gloria, being my favorite big name brand, never disappoints in that area.

The second third is a bit stronger in terms of body.  I am getting coffee, leather, less pepper, and more oak and wood with a touch of citrus not unlike lemon zest that builds in character.  It's well balanced and really rich.  New smokers should beware - this is not a cigar for the unseasoned.

The final third gives off an amazing cocoa sweetness with more leather, coffee, and a heavy earthiness that is awesome.  Man, I am running out of adjectives.  It performs great until nubbed.

Value: Unbelievably the sticker price for this beauty is around $6.50....yeah, I will be smoking the heck out of these.

Final Thoughts: I'm sold.  These new beauties are sure thing for me.  Easily one of the tastiest La Gloria cigars in a long time and with a low price, how can you go wrong?  The only complaint is the ring gauge - the whole line is bloated.  In fact this 54 ring beast is the smallest of them.  From there they jump directly to 60 and then a whopping 64!  Still, for the price, that sure beats a sharp stick in the eye.  The Serie R Esteli is on my short list for cigar of the year so far.  Highly recommended. 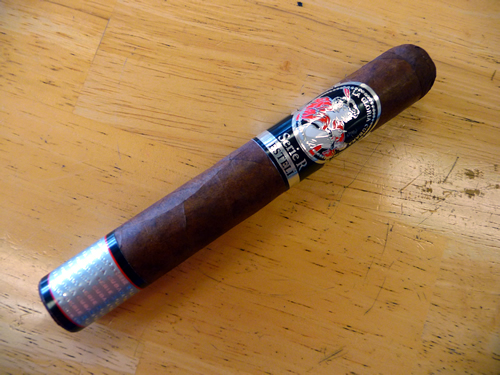 Photos can't do it justice.  It's a beautiful creation. 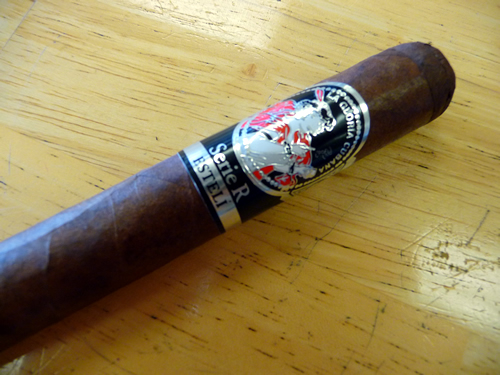 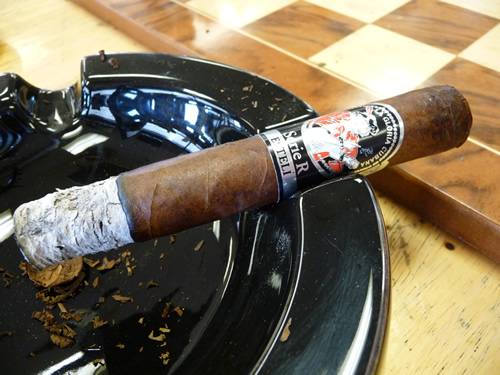 Check out that ash!