Ronald Reagan - movie star, public figure, 40th President of these United States.  I remember 3rd grade when we heard about the assassination attempt.  It was terrifying.    Of course, I also recall the quote from Airplane, " I haven't felt this awful since that Ronald Reagan film."   Mr. Reagan, to me, will always be the President of my school days.  Regardless of your opinions of his politics, you have to respect the guy.  In that light, Ezra Zion has created a cigar to honor our late President.  I have read a bit about this cigar and found myself very excited to give it a try.  I was given one as a sample for the Wharf so, without haste, let's give this thing a try....

Construction: The wrapper on the Reagan is a beautiful red brown sun grown Habano with very few veins and no blemishes.  Perhaps the most striking piece of the package is the banding.  It's gorgeous.  Well designed and containing some beautiful glossy golds, the presentation also contains a foot band with the name Reagan on it.  It's a well done bit of marketing and it makes me think I am smoking a piece of history.

Pre-light Aroma and Draw: Out of the cellophane, I found hints of sweet tobacco, cocoa, and leather.  The draw is perfect - not too open or closed

Light and Burn: Lighting with wood matches is a cinch and had I a sliver of cedar I would have put it to use lighting this baby up.  It's such a well presented cigar that I was almost afraid to light it.  The burn started off a little rough - maybe like Reagan's first few months in office - but it eventually evened out - with very little effort on my part - into a nice crisp burn line.

Tasting: Starting off, the Reagan hits with a nice mild spice that persists through the first third.  I also noted red pepper, sweet tobacco, and an overlying cinnamon flavor that is very nice.  The beginning is medium-full in body.  As the second third hits, I pick up some black coffee and orange peel added to the flavors from the first third.  There is still a nice hefty cinnamon overtone that really sets the flavors off.  The final third adds a bit more strength and complexity.  I found cocoa, cedar, black pepper, and citrus all the way to the nub.  I would say this cigar would pair well with a nice red wine during or after a big dinner.

Value: The standard price point for this chunk of history is around $13 - not too bad for a special occasion type of cigar.

Final Thoughts: The Ezra Zion Reagan is a great cigar.  I would offer these to the guys after a big dinner or to celebrate a special occasion.  It's not insanely complex or anything like that - more tasty and consistent - but the craftsmanship and care that has been put into it are easily noteworthy.  I highly recommend this cigar. 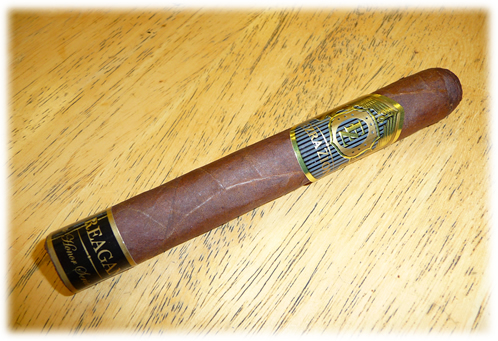 A cigar truly worthy of our 40th President 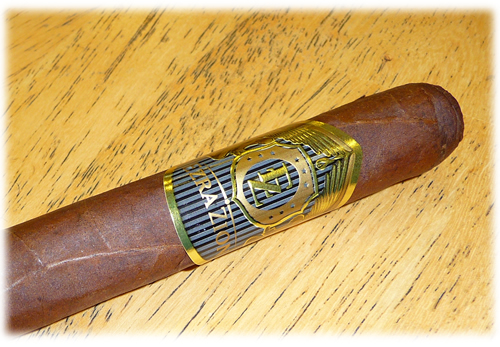 That band is insane!  It really shows off the care the guys at Ezra Zion put into their product